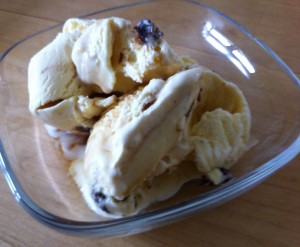 I first ate this fabulous ice cream at Sam & Sam Clark’s Moro restaurant in London – I’d never tasted anything quite like it. The ice cream is a basic custard-based vanilla ice cream. The real show stopping aspect is that the raisins are soaked in Pedro Ximenez sherry and a little is drizzled over the ice cream as it’s served. This ‘dinner party worthy’ ice cream is truly delicious and well worth the effort to make, although it is pretty easy anyway. Don’t be tempted to use any other sherry than Pedro Ximenez (available from most good supermarkets or wine merchants) – the grapes are sun dried first which gives it a fabulous treacly and sweet flavour. The large Malaga raisins from Spain are the best but use ordinary ones if you can’t find them in your local shops.

Pigeon Cottage Tip: I use a Magimix Le Glacier 1.5 litre ice cream maker to make all my iced desserts.