As far as I’m aware, I’m not allergic to any foodstuffs (only wasps!) and I can only imagine what a complete drag it is to have to read every food label, or make enquiries at restaurants and other people’s houses as to whether or not something on the menu includes a particular allergen. Anyway, a friend was coming to dinner the other night who is a celiac, which means she can’t eat gluten, so I wanted to make sure she could safely eat whatever I planned to serve. This chocolate and mandarin torte was perfect because although it looks like a posh chocolate cake, it doesn’t actually contain any flour. However, it does contain almonds so I’m afraid it’s no good if you have a nut allergy! 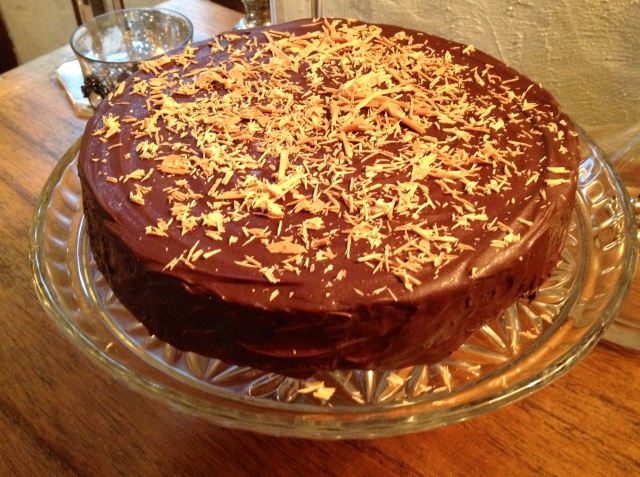 The recipe is based on an Austrian Sachertorte. The actual recipe is closely guarded secret so I researched lots of different versions of what people think the recipe might be (I eventually chose the Green & Black’s Lorna Wing version), and then added a further twist of my own using mandarin marmalade instead of the more traditional apricot jam (although you could use apricot jam if you like). It’s pretty easy to make, completely delicious and best if it’s made several days ahead and kept in an airtight container. If you’re racking your brains for a fab ‘make ahead’ Christmas dessert, this could be the answer to your prayers.

1 Response to Chocolate and mandarin torte